Often hunters and natural resource managers want to know how many deer occupy a particular property or area. Sounds like a simple question, right? Unfortunately, determining the number of deer roaming the woods in your particular area can be downright difficult, and sometimes next to impossible. We often tell people that if they can figure out a technique to accurately and precisely determine deer population size in a wide variety of habitats and conditions they would win wildlife management's equivalent of the Nobel Prize! One of the biggest problems is that population size is always changing, hence the name population "dynamics."

There could easily be about 10 different lines that represent changing characteristics of a population listed on this graph, but for our discussion we will focus on three aspects: population size, deer quality, and deer population production. The graph depicts how these population characteristics change as deer numbers increase from the starting point (as with a few deer that colonize a new area devoid of deer) to the saturation point, or what we call "carrying capacity."

The most rigorous scientific study of white-tailed deer population growth occurred at a captive population called the George Reserve Deer Herd located in southeastern Michigan. The George Reserve is a 1,146 acre area enclosed with a deer-proof fence. No deer existed within the enclosure until 6 deer (2 bucks and 4 does) were introduced in 1928. Beyond everyone's expectations, the population grew to 222 deer in just 7 years! That's a deer density of 1 deer per 5 acres. The experiment was repeated in 1974 with 10 deer. This time the population grew to 212 deer in only 6 years. These experiments demonstrate the tremendous capacity for deer population growth when occupying good habitat.

If this growth rate remained constant until year 10, the population would number about 900, or 1 deer per 1.3 acres. This growth trend depicted on the graph is called exponential population growth, which means the population grows without limits. Despite a constant growth rate, the deer herd increases at greater amounts each year because more deer are reproducing, which is what caused the line to be curved instead of straight. To maintain this rate of growth, reproduction and survival must remain constant. In reality, it's impossible for the deer population to maintain this rate of growth. At some point there is not enough remaining food and deer begin to die of starvation and reproduction is halted. To avoid this eventual population crash, deer populations have a self-regulating mechanism called density-dependence. 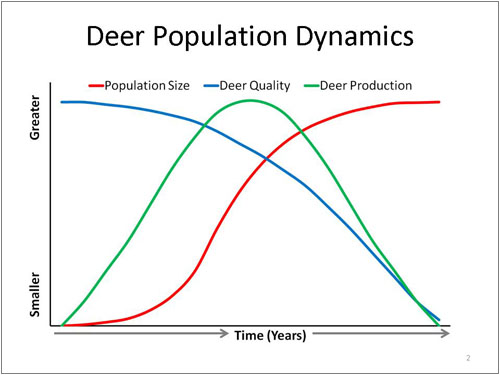 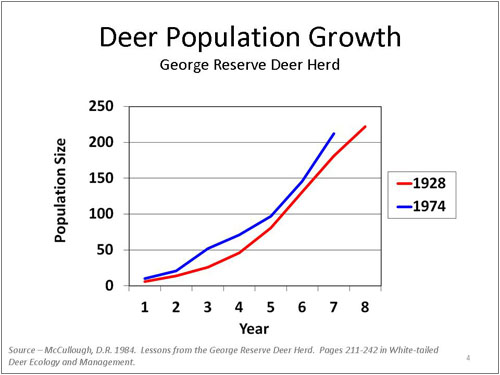 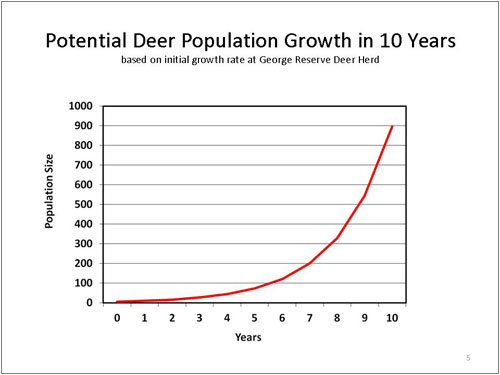