This incremental, annual decline in food supply affects the body condition of deer which influences their reproductive rate and survival rate, and ultimately reduces the population growth rate. Thus, as deer populations near the habitat's carrying capacity the rate of growth begins to slow down. That is why deer population growth is often depicted with sigmoid or "S" shaped growth curve as in (Figure 2 seen here); in the beginning deer populations have exponential growth, but as food becomes limited the growth rate begins to decline and the annual change in population size decreases.

This figure shows the theoretical relationship between naturally occurring deer food and deer population size over time. When deer populations get too high they can actually damage the plant-food base that sustains them. This is because the deer eliminate the number of food producing plants, or they diminish the capacity of those plants to produce enough forage for the deer. This is similar to pruning a shrub or mowing the lawn. The right amount of plant removal will typically not damage the plant, or sometimes this even stimulates plant growth. But when too much of the plant is consumed it may become damaged and die, or not provide additional plant growth. Habitat damage and subsequent reduction of deer carrying capacity is depicted in (Figure 10) below.

How can a deer population exceed the habitat's carrying capacity?

Although we refer to carrying capacity as this maximum number the habitat can sustain, in actuality this number is always changing. Not only does carrying capacity fluctuate from year to year, it fluctuates from season to season. Because deer are herbivores, they depend on plants for food and plant growth is affected by precipitation and temperature. So annual changes in rainfall, for example, can influence carrying capacity by affecting the growth of deer food plants and their quality. Furthermore, the annual acorn crop can be highly variable. 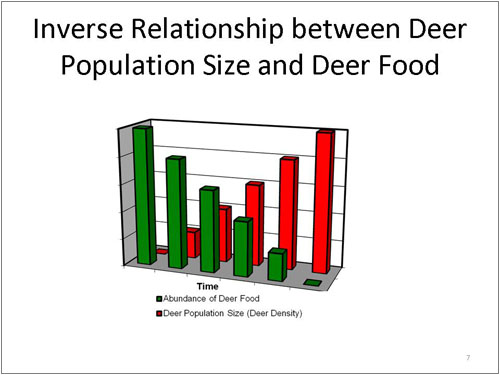 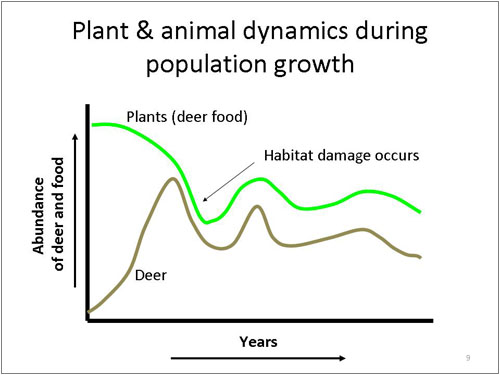 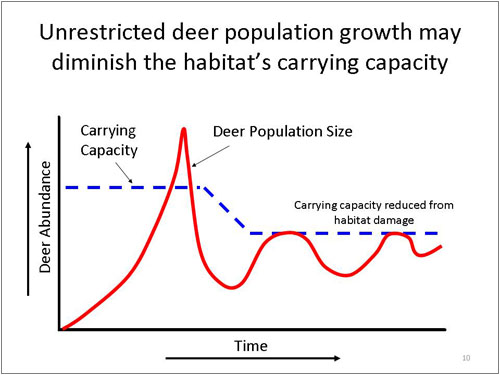 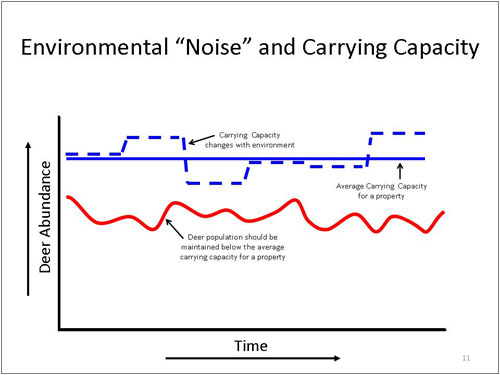