Ecology of the Rut

Though arguably one of the most discussed deer hunting topics, the breeding season, or "rut", is probably the least understood by most deer hunters. The timing of the rut is controlled by the presence of females willing and able to breed. The fact is, a buck is capable of breeding from the point when he sheds his velvet in early fall until shortly after he sheds his antlers. If bucks initiated the rut, then it would last about 5 months of the year! This is certainly not the case.

The timing of the rut can be thought of from both population and individual deer perspectives. Each population has an average or peak breeding date; which describes when the most intense reproductive activity takes place. There is considerable variation in peak breeding dates across the whitetail's range, with the greatest variation seen running from north to south (latitudinal). Then, there's variation of breeding date by individuals within each localized population.

A doe can reach breeding status as young as 6 months of age, as a fawn. This is typically based on the doe fawn reaching a "critical mass," or the weight and body condition required to sustain itself through the food-stricken winter and support an unborn fawn. In the South, that weight is typically around 70 pounds. However, breeding rates for fawns in the South are extremely low compared to Northern herds, with most averaging below 10% depending on habitat quality and timing of the breeding season within a state. Breeding by fawns typically takes place up to a month after breeding by adult females.

The timing for the peak of the rut is synchronized by photoperiod or the varying amount of daylight. A series of hormonal events are set in motion that result in egg development and release, and of most importance to the hunter, the behavioral changes that make females particularly attractive to bucks and receptive to their attention, as seen in the Biology of The Rut Section. The window of time in which we as hunters might observe an individual doe in "estrus" or in "heat" from start to finish, can range from 24 to 48 hours. The cumulative effect of many females in the population entering estrus within a short period of time generates the fireworks we call "The Rut."

If breeding is successful and fertilized eggs are implanted in her uterus, the doe releases the hormone progesterone to signal her body that she is pregnant. If breeding fails, she will re-enter estrus again in 21-30 days. Several factors can attribute to "failed" breeding, but the most common culprit is an unbalanced adult buck to doe ratio. An estrus doe might not get bred because bucks are occupied with other "hot" does, or they might get bred by a buck that doesn't have viable sperm because he has bred another doe too recently. In research pens, females have cycled up to 7 times before entering the non-breeding stage, but adult buck to doe ratio would have to be dramatically unbalanced for that to happen in the wild. The more females that fail to successfully breed during their first estrus, the longer the duration of the rut. Fortunately, an unbalanced buck to doe ratio can be fixed by decreasing the buck harvest and increasing the doe harvest, which will bring the ratio back into balance.

Over eons of time, Mother Nature has applied selective pressure on the timing of peak breeding season. Ultimately, breeding is synchronized so that fawns are born at a time that maximizes their chance of long-term survival. Important considerations include adequate forage to support the energetic demands on the lactating mother. Optimum milk production allows fawns to reach a body size necessary to live through the following winter when deer foods are scarce. This is especially critical in northern environments where surviving severe winters will be a challenge for an undernourished, undersized fawn. In areas like the Mississippi River basin, birth timing may be governed by events such as spring flooding. Does are essentially "forecasting" 200 days in advance (on average) when to have their fawns during optimal forage availability and weather.

Thus, timing of fawn births is a product of natural selection and adaptation to deer herds specific to the region where the live. However, breeding in the South can be much less synchronous because they don't have the same level of environmental forces that restrict when fawns can be born and survive the winter. In other words, because of the mild Southern winters and availability of forage throughout the fall, there's a much wider window of days that fawns can be born and survive. Lack of this adaptive pressure allows southern populations to have more variation in the length or duration of the rut.

In the northern regions of North America, with extreme selection pressures on fawn survival, breeding season is typically early and of short duration. For example, deer populations in Pennsylvania have peak breeding in mid-November with nearly 70% of all does bred during that month. In contrast, deer in the Gulf Coastal states exhibit peak breeding ranging from summer through late winter! Florida has the most variation in breeding dates, in both the time of peak breeding and the duration of breeding season.

There are several possible reasons for the widespread variation in peak breeding dates across the South. One theory is that genetic patterns remain from the whitetail restoration era of the mid-1900s, when thousands of deer were moved from all over the U.S. and Mexico to repopulate area in the South were deer were absent. Most of these source locations had differing breeding seasons. For example, deer from both Wisconsin and Mexico were used during restoration, which have very different breeding seasons. Other theories include environmental factors such as flooding patterns, blood-feeding parasites, and rainfall and its impact on nutrition. One thing is for sure, the wide range of breeding dates among regions of the South show that the environmental forces, which restrict the range of breeding dates in the North, aren't present in the South.

The MSU Deer Lab has learned a lot from analyzing the extensive variation in breeding dates across Mississippi. Peak breeding varies from late November in northwestern counties to mid-February in southeastern counties. However, within each region the duration is relatively consistent; about 30-45 days with most of breeding taking place within a 21-day period centered on the peak breeding date. There may be a second, much smaller peak of breeding 3-4 weeks later, due to does that had to recycle and fawns that mature their first winter. This is often what hunters call the "Second Rut." This consistent duration period teaches us that although there are less adaptive pressures associated with milder winters in the south, it does not necessary mean that there will be a longer rut.

MSU Deer Lab research has shown that some variable breeding dates are controlled by genetics. We compared two types of genetic information between pairs of populations separated by less than 30 miles; peak breeding dates were similar within some pairs and differed by 30 days in other pairs.

Thirty-day differences in nearby populations have been maintained for generations due to a behavioral concept called female philopatry, which is when female offspring tend to stay nearby their mother. These results show that females contain a genetic code that regulates the potential range of their breeding dates.

Within a genetically-controlled potential range of breeding dates, other factors can influence the dates. Previously, we mentioned that unbalanced adult buck to doe ratio affects breeding success. Thus, changes in population composition can alter the timing of breeding. We have documented shifts of up to 30 days in peak breeding date due to improvement in buck to doe ratio and buck age structure.

In another study that implemented major habitat manipulations to improve forage quality and quantity, we saw a shift in peak breeding date by 45 days in just one year!

In contrast to many hunters' perceptions, weather has absolutely no influence on the timing of breeding behavior. That is, when a doe comes into estrus there will always be a buck there to court and breed her (assuming there are sufficient numbers of adult bucks in the population). Weather does affect deer activity patterns, and major changes in weather may affect how hunters perceive the population's rutting behavior. For example, a cold snap after a period of abnormally warmer weather may increase visibility of deer, making it appear that the rut is just starting. Given that a female's breeding cycle is controlled by her internal hormone levels, the outside temperature isn't going to affect when she is in estrus.

A myriad of "theories" and "old wives' tales" circulate through the deer hunting community each year. Will the rut be early this year because it's colder? What does the lunar calendar look like? What is the best week to hunt? The bottom line is rarely will the timing of the rut change from year to year. If it does, it is not linked to moon phase or temperature, but more likely changes in habitat, herd demographics, or precipitation, making it that much more unpredictable! If nothing has significantly changed from one year to the next in your area, you can plan on circling the same two weeks on a calendar year after year as "can't miss hunting." 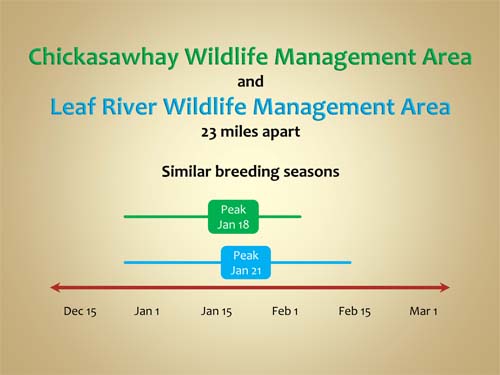 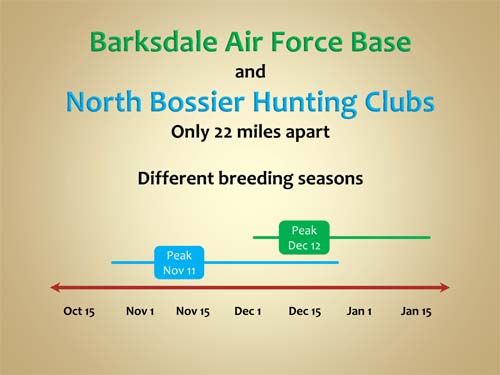 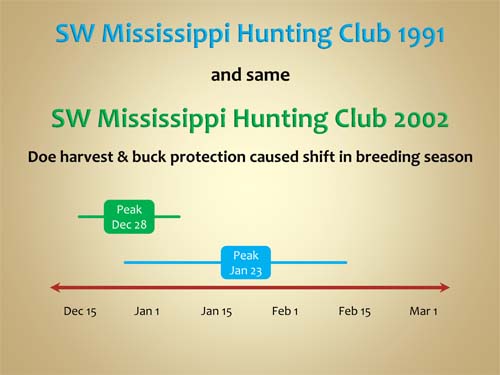