Cover refers to physical structure that provides one of two functions. Protection from environmental extremes helps insure over-winter survival in colder regions and minimizes summer heat stress in hotter regions. Distribution of white-tailed deer in North America is limited in part by presence of adequate types and quantity of cover. Protection from predators, including humans, is important for all age classes, but is especially critical to fawn recruitment in the presence of coyotes and bobcats.

Thermal protection and shelter from deep snow provided by mature conifers with dense canopies are important habitat components in the whitetail's northern range. Deer concentrate within these "deer yards" and conserve energy by using common trails through the snow. Deer yard quality and distribution are critical to winter survival where snow depth exceeds 1-2 feet for extended periods. In hilly or mountainous areas, yards are often on south-facing slopes to optimize warming from the sun. In eastern North America they often occur along major river valleys or coastlines of the Great Lakes or ocean. Upland deer yards often include dense stands of mature spruce, fir, and hemlock while lowland yards include similar stands of black spruce, balsam fir and white cedar.

White-tailed deer occur over a wide range of wooded canopy coverage, both across the continent and within a county. In South Texas whitetails thrive with only brush (woody species that mature at less than 25 feet height) and herbaceous cover.

As tree canopy closure increases there is a general decrease in forage production due to lack of sunlight hitting the forest floor. Thus, it is important to have the correct mix of timber canopy cover and open canopy that allows for forage production and fawn hiding cover.

In areas with enough rainfall to support tree growth, as little as 10 percent of an area covered by trees can support a thriving deer population as long as there is adequate hiding cover within it, and adequate herbaceous vegetation nearby that provides fawn hiding cover and forage production. This general description fits much of the agricultural area of the Midwest, where about 75 percent of land is in agriculture. It also fits the description of many suburban and ex-urban housing developments, which explains the abundant deer populations (and associated conflicts) in these areas.

Hiding or escape cover consists of physical structure from ground level up high enough to conceal an animal. Quantity and distribution of fawning cover is especially important during the first few weeks of a fawn's life to minimize predation by coyotes and bobcats. Increased distribution and numbers of coyotes has brought fawn hiding cover to the forefront of habitat management in eastern North America. 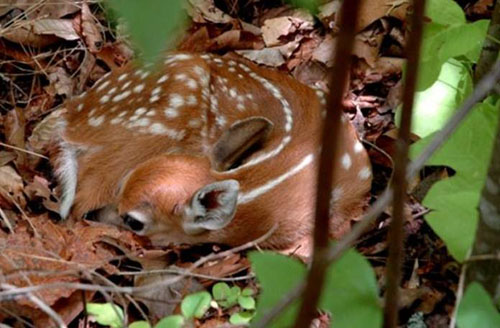 A fawn's spots are a natural defense against predators, breaking up their pattern so they are less recognizable. However, this natural camouflage works only up to a point, and they require structural cover for more complete protection. 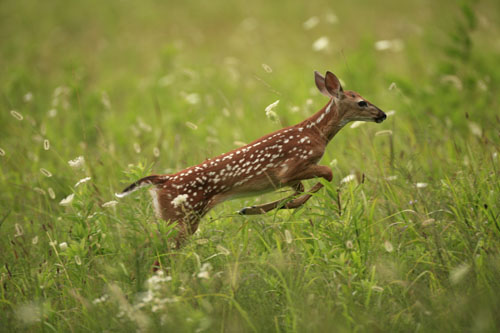 Mothers typically place their fawns in low vegetation as a predator avoidance strategy during their first few weeks of life. Fields are often chosen, so they must have adequate vegetative height for concealment. Vegetation in this example is not high enough to provide significant cover from predators. 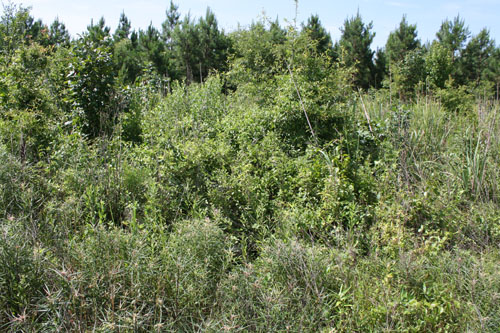 Hiding is critical to a fawn's ability to avoid predation during their first weeks of life. Fawns have unique behavioral adaptations to limit discovery, but must have access to large patches of low dense vegetation spread across a property to limit successful searches by coyotes and bobcats.