Antlers as a Tool in Management

When implementing a deer management program, antlers can provide an excellent measuring tool to determine the effectiveness of that program. Antlers are useful yard markers because antler growth responds to a deer's nutritional intake. Growth of antlers can help a land manager determine if his herd size is exceeding the food resources available in the habitat. In other words, do the deer exceed the land's carrying capacity and is the management strategy being used promoting effective use of the habitat? Additionally, most management programs are designed to increase antler size of bucks on a property, so the best yard marker for determining success of a program is the average antler size of bucks on that property.

To effectively use antlers as a measuring stick certain rules about the antler sampling process must be followed. First, the sample of animals must be representative of the population. That's a problem because most hunters are biased when selecting a buck for harvest. If hunters focus on killing the largest bucks, then the antlers sampled would be bigger than the average antlers in a herd. For example, if a basketball coach selected 10 potential players from a group of 100 students, that sample of ten would not represent what the "average student" looks like. If a sample is selected with a bias, then it is a biased sample that doesn't represent the population.

The second most important rule about measuring sticks deals with sample size, and it applies to more than just antlers. A sample is a portion of the population that is measured to estimate the value for the entire population. Let's use the student analogy again, and suppose we want to estimate the average height of all 100 students. Which would give us a more reliable estimate of average height, a sample of two or a sample of ten? Obviously, the sample with a greater number of measurements will be more reliable. In deer management, having more deer samples will increase the precision and accuracy of the information collected.

Having a large, unbiased sample allows a manager to accurately evaluate the success of their management program. So how can you obtain a relatively unbiased sample of antler development when hunters are selectively harvesting bucks? Trail cameras provide an excellent source of information on such properties. Antler size must be evaluated within an age class because antler size increases with age. Our software BuckScore allows you to estimate age and antler size of photographed bucks without harvesting them, so you are able to obtain an larger, unbiased sample of your buck population. For more on this topic: Estimating Age and Antler Size of Photographed Bucks. 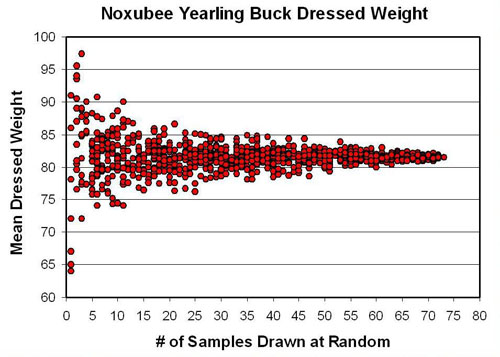