Why Do Deer Have Antlers?

No other group of animals has these unique bones on their head, so why do deer? Plus, it costs deer a fair amount of energy to produce antlers, energy that could be spent other ways, so those pricey antlers better be worth something, right? Well, it seems that antlers evolved mostly as weapons, but it turns out they have a few other purposes too.

Although antlers would appear to be used for combat against predators, it's unlikely deer antlers evolved for this purpose. If antlers are a defense against predators, then why do only male deer have them? Don't females need to defend themselves too? Well, that would make sense, but antlers aren't actually the first line of defense when predators are involved. The most common defense is, quite simply, running away. Males are actually pretty reluctant to use their antlers to fight off predators unless they find themselves cornered. This fact, combined with the absence of antlers in females, seems to suggest that even though antlers do come in handy for self-defense from time to time, this isn't the primary reason that antlers evolved.

Research shows that bigger antlers may be a signal of age-related dominance. White-tailed deer behavior, in particular, indicates that antlers may actually be a big part of gaining social status. Both before and during breeding season, males often use their antlers as a threat. They posture and spar with the other males as a way to establish hierarchies.

Of course, antler size is closely related to overall body size, so it may be the generally bigger body size (instead of the antlers themselves) that actually intimidates smaller and younger males—it's hard to separate these two factors. As males get older their sparing can get really serious, and often leads to injuries and occasionally death.

In addition to being a built-in weapon, antlers may also be a signal of male quality to females. In other words, bigger antlers might be a turn-on to female deer when breeding season comes around. Antler size does indicate relative age, and it may even indicate genetic superiority, so females may use antlers as a positive indicator of which males to breed with.

When it comes down to it, though, the only thing we can be sure of is this — why antlers? Because they're a handy weapon against other male deer! Drawing the attention of the ladies may possibly be just an extra (not primary) benefit. 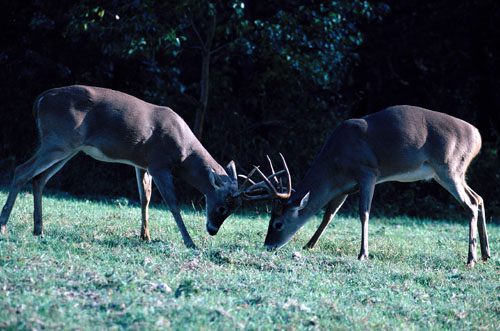 The primary reason male deer have antlers is for use in establishing dominance over other males. 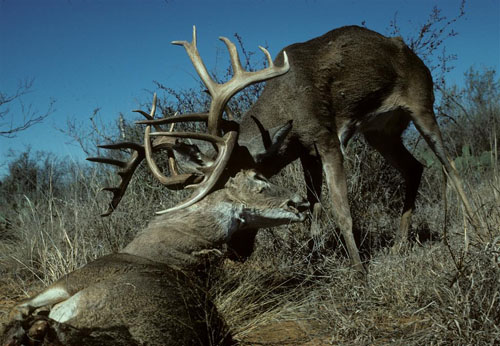 Battles to establish dominance at older ages sometimes take a serious turn and lead to injury and even death, as happened when these two mature bucks could not separate their locked antlers. 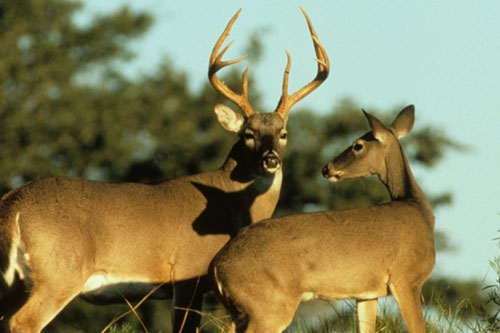 Some scientists theorize that antler size is a sign of quality, with larger antlers indicating superiority over other males as an attractant to females.