The last topic we want to cover is age-structured reproduction, which is important to understand white-tailed deer population dynamics. Age-structured reproduction simply means that the reproductive rate varies by the age of the mother. In white-tailed deer, fawns rarely reproduce, except in regions with superior habitat quality (like the agricultural regions of the Midwest). In Mississippi, only about 10% of fawns are bred. Yearlings usually breed, but they typically give birth to a single fawn. Two-year-old does will give birth to two fawns when in good body condition and mature does (three years old and older) will typically give birth to two fawns and sometimes three.

Another, and more complete, way of looking at this age-structured relationship is to include survival of deer as density increases. See in Figure 23 a conceptual model of how each age class contributes to reproduction (the weight/width of the line shows the relative reproductive contribution) in good habitat when the population is low.

Also keep in mind that fawns are actually contributing to reproduction in this scenario, but their offspring are born the following summer when they are classified as yearlings. Furthermore, note that survival of does in each class is high, so most of the animals in each age class survive and move to an older age class the following year.

Compare reproduction and survival in Figure 24 when either habitat quality is poor, or when deer populations are greater and approaching carrying capacity. 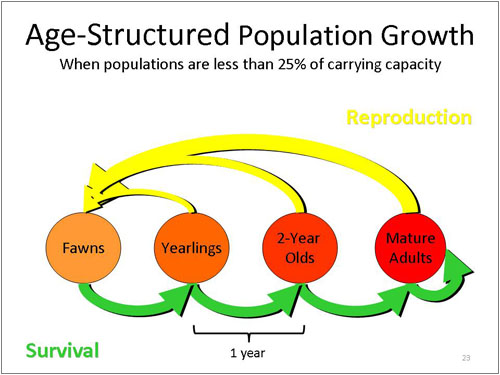 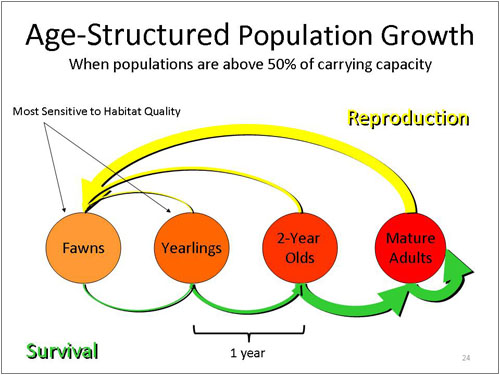