Age, nutrition, and genetics clearly have significant impacts on antler development of white-tailed deer. Taken individually, each of these factors has clear impacts on antler growth. Most applied deer management gets complicated when applying these fairly simple biological facts to the complex reality of real-world management. For more details on these factors: Managing for Antler Production.

Age is one important factor that influences antler size. Of the three factors influencing antler characteristics, age is the simplest to manipulate in a deer management program designed to increase antler size.

Prevalence of antler buttons in enclosed populations with supplemental feed has varied from 20% in Mississippi (Jacobson 1995) to 84% in Michigan.

It takes a buck about six years to reach maximum antler size. However, a buck's first set of antlers seen by hunters come in at one year of age. At that time, the antlers will be 10-25 percent of their maximum future size. Allowing a buck to age just one more year will result in his antlers possibly doubling in size, reaching up to half their full potential in just two years! At three years their antlers jumped in size again, reaching about three-quarters of their maximum size.

Clearly, not harvesting young bucks and allowing them to grow older is a critical component of any deer management program designed to increase antler size.

While passing on a yearling might seem like a foolproof way to ensure the likelihood of seeing larger antlers the next season, a buck's age cannot guarantee perfect trophy bucks in just four years of management. One reason for this is that the birth date of a buck can greatly impact the variation of antler the buck will display. In more southern latitudes where deer have longer breeding seasons, the average birth date of forked-antlered yearlings was about one month earlier than spike antlered yearlings. And while the differences in birth days is unlikely to affect the eventual size of a buck's antlers, those bucks born in later months have antlers that can take a year or two longer to hit their growth spurt. Despite the risk of a late growth spurt in some deer, anyone attempting to implement a deer management plan should take into consideration the age of a deer if they want to increase antler size.

The link between a buck's nutritional intake and its size seems fairly obvious. If a buck takes in the right quality and quantity of food, then it should grow big and strong, in its body and its antlers. The majority of research done on the relationship between nutrition and antler size focuses on a buck's protein intake. Scientists have learned that buck fawns require a higher level of protein than older bucks to help achieve optimal first year antler growth (and a better early start means better antlers at older ages!). Weaned fawns need their diet to consist of up to 20% protein. One reason for this is that protein is vital for the development of body mass. Older deer already have grown their body mass and therefore need less protein to achieve optimal antler growth. On average, regardless of age, a buck should take in an average of 16% protein from spring through summer to achieve optimal antler growth. In a study in Texas, four year old bucks fed 16% crude protein grew antlers with about a 20 inch larger Boone and Crockett score than bucks fed 8%.

Some places, like the sandy soils of the southeastern coast, may not contain enough minerals for the buck to easily replenish its reserves. In these cases, managers can create inexpensive homemade mineral supplements using two parts di-calcium phosphate and one part mineralized salt. Beyond calcium and phosphorus, little is known about what vitamins and minerals are needed to achieve optimal antler growth. Despite the lack of knowledge on vitamins and minerals, we know that proper habitat management will allow deer to maximize nutritional content of their diet.

Like almost every other complex creature on this planet, a buck is the product of its parents. Like you and me, a buck inherits certain physical characteristics from the combinations of its parents' DNA. The size of a buck's antlers is no different. The "genetic potential" of a buck's antlers comes from this combination. Having said that, the ability to actually measure what impact genetics has on a buck's antler growth can be extremely difficult due to a variety of external factors. For example, the ability of a buck to take in sufficient quality nutrition can greatly impact the size of its antlers, regardless of genetics. In addition, factors such as animal health, environment, and birth dates all affect the expression of a buck's antlers' genetic potential.

There have been only two studies into the heritability of antler characteristics, one here at the MSU Deer Lab ( Jacobson and Lukefahr 1998 ) and one by Texas Parks and Wildlife Department. The relative heritability of antler characteristics was almost twice as great in the Texas study. Results in the MSU Deer Lab study showed that external factors can affect the expression of genetic potential. A young buck fawn's development relies heavily on its mother's ability to produce enough quality milk. Her ability to find and select a quality habitat for her young buck also affects his future well-being. These maternal factors combined with the habitat's quality greatly contribute to the overall success of a fawn and ultimately the success of the fawn's first antlers — here we are talking about nutrition, which shows how a simple biological factor such as genetics is complexly related to other simple factors.

While we may need more research to further quantify heritability of antler characteristics, it is clear these features are controlled by both the mother and the father. It's also clear that we cannot impact genetic characteristics of free-ranging populations of deer ( Role of Genetics in Management of Deer, Demarais 2007 ). Therefore, effective deer management programs focus their efforts on factors that can more easily be altered, such as age class distribution of the buck population and nutritional quality of the habitat ( Managing for Antler Production ). 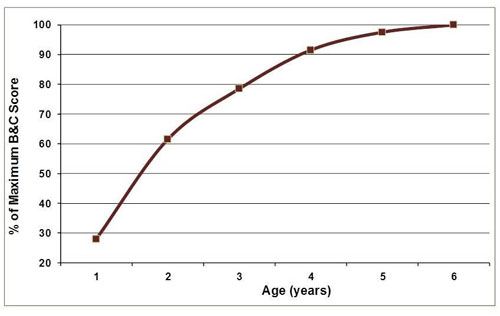 Antler size increases significantly each year, reaching their maximum Boone and Crockett score at about 6 years of age. Protecting young bucks is the most effective single method to improve antler size in most deer management situations. 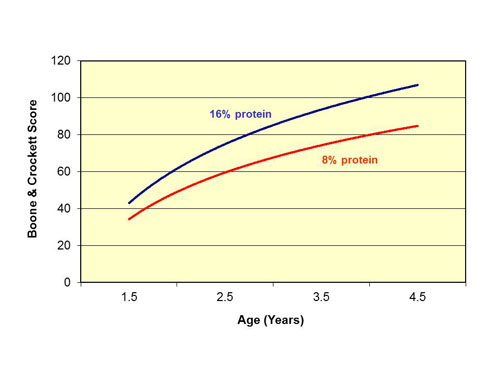